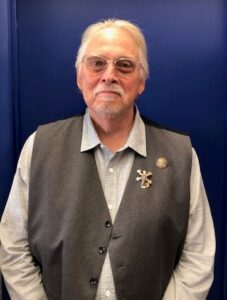 Greetings to all in the name of Christ,

I’m an early morning riser. When I was raising my children getting up early in the morning afforded me quiet time to review the day. To see what was on the horizon for a new day and just some time to contemplate life in general.  An early rising also gave me time, especially in the summers in Quartzite, Arizona to collect and mine specimens for our rock shop before the oppressive heat drove us inside. The habit has stayed with me and although I often get the response of how sad it must be to wake up so early, this time of quiet brings me great satisfaction. In this time of relative quiet I do my morning prayers and devotions and commune with the critters who are beginning to move about. I have regular conversations with the roadrunners and ravens that stop by for a chat.

Lately my morning meditations have led me to thinking about the “Walk to Emmaus.” Not only the biblical account but the weekend retreat by the same name. It is an ecumenical retreat that came out of the Roman Catholic Cursillo movement, and the Episcopalian-Lutheran “Tres Dias” movement. The Upper Room of the United Methodist Church brought about the protestant version some 40 years ago.  It might be one of the best retreats for going deeper in our walk with Christ.  It is specifically tailored for those who are already on their Christian walk and are looking for a way to deepen that walk within the local church.

My walk was #87 1997 at Central UMC in Phoenix. My service began on the music team and as a lay leader. After my shift into the ministry I have served numerous Walks on the Spiritual teams. It seems the more you serve on the “Walk” or as a leader in the local church the more I personally receive inspiration to be a servant disciple of Jesus. If some one approaches you to ask if you would like to go on the walk I hope you say yes.

And yes, you late morning risers, you don’t what you are missing!

Grace and Peace to All!